3 wires and one lost Saturday

On a completely different subject ....... it's amazing how one can loose an entire Saturday just trying to connect 3 wires. Why must we tinker with stuff? To be honest, I could have taken it to "a guy" and  paid him to connect the wires. But I said NO! I can "do it myself". After all, it's only 3 wires, right? With that, my Saturday was doomed. It started out well. The part I thought was going to be the hardest turned out to be the easiest thing I did all day. Now, it was on to phase two. "The easy part". With a call already haven been placed to "the guy", who was nice enough to give me some information, I went about connecting the 3 wires. It can't be that hard, right? So I'm off to the hardware store to buy a soldering iron, some connectors, and a test light. Everything I need is at hand. Back at the house, I enter the garage and prepare to do battle with the 3 wires. Little did I know the 3 wires were sent directly from Hell. The original part that was being replaced came off in record time. All I had to do now was, strip the old wires down, strip a piece off the new wires, cut some heat shrink, solder the wires together "for a good solid connection", shrink the covering, connect the battery, turn the key and "PRESTO"! All done and ready to test out. But that's not exactly how it went. In order to make sure everything is connected correctly, it's always a good idea to test fit the connections together before you do any soldering or heat shrinking. That being done, you then just turn the key and PRESTO! It lights up and your ready to solder and shrink. So, I turn the key and ....... nothing. No problem, just a couple of adjustments and .... nothing again. Over and over, adjustment after adjustment, nothing. The pattern was set. I wonder if this is how Charlie Brown feels as he's flying through the air after missing the football he was trying to kick? The best thing to do is walk away and, start fresh tomorrow. I spent Sunday doing other stuff and thinking about the problem I was having connecting the 3 wires from Hell. It just can't be that hard. Semi-serious self doubt was beginning to creep in. Am I really that much of a spaz that I can't even connect 3 lousy wires without having to call "a guy" to do it for me? For goodness sake, my very "dude-ism" was at stake here. Sunday came and went with no action on the 3 wires. Best left alone until Monday, just in case "I need to call the guy". Off to bed with those stupid wires haunting my every thought. Monday will be better ..... it has to be.

With a full nights sleep, a day away from "the wires from Hell",and a better attitude, I went back into the garage to finish the work I had started on Saturday. For the sake of argument, if I had let "the guy" do it for me, it would have taken him a half an hour, for which he would have charged me 35 bucks. Instead, I chose to "do it myself". It ended up taking hours of my time and probably 40 or so bucks for tools, parts and other stuff that didn't work in getting the 3 wires connected right. It also cost me a beautiful day of riding my motorcycle because it was "only 3 wires". But in the end, I beat it. I figured out the problem and got it to work. It was such a relief. I no longer felt like a spaz. Like a guy who was on the verge of loosing his "dude-ism". I was back baby and better than ever. The problem ended up being a cheap part used by the manufacturer that when replaced, made everything work just like it was supposed to.

I can't wait until the next time I decide "not to call the guy".

If anything, it's sure to be an adventure. 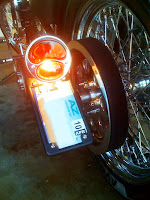 Posted by Tony Hernandez at 9:37 PM No comments: Links to this post