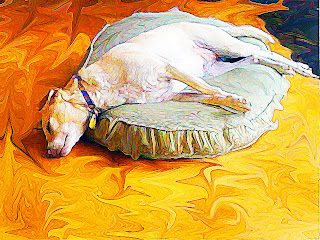 Posted by Tony Hernandez at 12:56 PM No comments: Links to this post

Early influences, Teacher Torture ...... and a trip to the principals office

My life as a "good kid" seemed to be going well. Even though I lived in "La Victoria Loca" .... I was, for the most part, able to stay out of any real trouble. My only trip to the principals office in grade school was for being in a fight where I got socked in the eye but never returned the punch. Other than that, my life was pretty drama free. That was, until I got into Junior High. [ I think it's also called middle school ] It was then, 7th grade, when I met a guy in my 1st art class named Steve H. He was a tall skinny football player dude who was very into art, which was a strange combination in those days. Anyway, this Steve guy, as far as I could tell, was a bit crazy but very artistic. During one of our classes, he invented a dog character named Otto for an assignment. He then proceeded to make a paper mache figure of the dog for the next assignment. I know that doesn't sound like much but Steve, in his youthful wisdom, had made the figure of Otto the dog with it's leg lifted as if he was preparing to pee. We were sitting there laughing at it when the teacher came by to check out our work. She looked at the figure ... looked at Steve ... looked at me ... then just walked away. I thought it was the hardest I would ever laugh in my life ..... right up until our art class switched teachers with the other class. [ just to mix up the art experience by the two teachers ] We went from a young female "former Playboy playmate" teacher in her 20's to an old man by the name of Mr. Salazar. If there was ever a bizzarro world in junior high art classes, this was it. Mr. Salazar was great. He had to be nearing retirement age by the time we got there so, being "cool and hip" like the other teacher was a bit of a struggle for him, which in turn, made it fun for Steve to mess with him in the most subtle ways. But "subtle" would be thrown out the door a few days later. On this particular day, we were sitting in the back of the classroom as Mr. Salazar had just begun the process of teaching us all about pottery and ceramics. He had a big lump of clay on his desk from which he was pulling golfball sized pieces off of and, tossing them to the students in the class. I guess it was his way of being "cool and hip". But Steve, once again in his youthful wisdom, didn't think it was that cool or hip. When Mr. Salazar tossed him a piece of clay, he caught it, squeezed it in his hand, and proceeded to throw it back at him as hard as he could. It missed him by inches, thudding hard into the chalkboard directly behind him with a loud bang. The entire class jumped at the sound of the clay hitting the green board. It stuck there like a cartoon pancake for a second, only to slip down in slow motion and land on the ledge where the chalk was kept. Everyone in the room sat there in silence ..... well, almost everyone. In the very back, were two students, who were doing their very best, not to bust out completely in laughter. The next thing I knew, Steve and I were on our way to the principals office. I had never been in the junior high version of that office so it was kind of an adventure. On our way there, Steve decided that we weren't in that much of a hurry to get there so, we spent the next 20 or so minutes going to some of his other friends classrooms just to say hi. It was my first real experience not following the rules. I think I enjoyed it more than I should have.

I recently saw Steve for the first time in 30 years at a class reunion. When I asked him if he remembered the "clay incident" he shouted out "Mr. Salazar!"

Steve's no fear approach at living life and creating art is something that has stuck with me since that day.

Posted by Tony Hernandez at 12:38 PM No comments: Links to this post

Hippy Strap and the Black Hat

I now have this cool camera. I take it everywhere I go. Photography magazines and catalogs are my new vice. So many new trends in cameras and gear. Zoom lenses, flash units, motor drives, light meters. All sorts of goodies filled the pages. But there was one piece of equipment that seemed to be "the thing to have" back in the day. It was a 2" wide camera strap that looked like it had been made by a hippy belt weaver. I'm sure you remember the look. I found one at a camera store, bought it, and put it on my camera. No more geeky looking skinny strap for me. It's funny how something as simple as this can make such a change in one's attitude. I now felt like "one of the in crowd", photographically speaking of course. The first time I saw this awesome accessory was my sophomore year in high school. There was this guy, a year ahead of me, which made him a junior, who used to walk around school with a camera and wearing a black hat. He seemed to know everybody. Jocks, cheerleaders, AV clubbers, everybody. All clique lines were blurred with this guy. He stood on the sidelines of all the football games shooting pictures of the action, and the "pom pom girls". He was, in effect, my new hero. His name was Bob and he was the "dude" when it came to photography at my high school. Aside from being the photo editor of the yearbook, Bob was also a role model when it came to "shameless self-promotion". He had T-shirts made with his picture on it, wearing that black hat, holding a camera, and a tag line that said: "Photos by Romi". The fact that he was still in high school and already promoting himself did not escape me. My Dad would call this "a good hustle", which meant my Dad was impressed. I met Bob in the bleachers of a basketball game that year. He was videotaping the game for the coach with what looked like an old reel to reel tape machine with a clunky camera connected to it. I went up and started talking to him. He was more than happy to talk about photography, being on the yearbook staff, and shooting pictures of pom pom girls. After a while, I mentioned an interest in being on the yearbook staff as a photographer. He said: "go talk to Mrs. D". She was the Teacher in charge of the book. I figured I had nothing to lose and said I would talk to her next week. Talking with Bob that day was a revelation. It was the fist time I was able to discuss photography with someone without them being totally confused. He understood the lingo, the equipment, and the passion shooting pictures evoked in ones creative drive.

All I could think about was shooting pictures of pom pom girls and getting into football games for free.

Posted by Tony Hernandez at 8:56 AM No comments: Links to this post