"You shoot pictures. I shoot photographs."

The first time I heard this little doozie, I knew it was a keeper. Talk about speaking volumes with six simple words. It came from another "photography advisor" we had briefly during my first year on the staff. Rick M, as he was known to us, somehow knew Mrs. D, the scary, but fair dictator of the yearbook. He had been in the Navy. That's where he had learned the skill of photography. He was meticulous in the darkroom. His attention to detail, not to mention his photography knowledge, was far above anyone on the staff. The careful way he went about everything he did regarding the photographic process was inspiring. We all learned a lot from Rick during his short time with us. He did kind of kill the "Nerf basketball" time in the darkroom but, he did teach us new techniques in film processing, printing, and best of all, shooting. A wizard with stop action photography, he used his flash in a way we had never seen before. It's wasn't some groundbreaking technique back then, or even now, but with all of our limited knowledge of photography as high school-ers, none of us had seen anyone use a flash like he did. We were all "available light guys" back in the day. "All hail to Ansel Adams and Edward Weston!" we would chant in our tiny little minds. Using a flash was always the last resort for us. When we didn't have enough light, we would "push the film" a stop or two and presto! Rick used the flash in a different way. He was all about stopping the action and getting the shot, but he still wanted to have some of the ambient light showing in the image to give it "balance". He would literally wait for entire quarters in a basketball game to get one or two good shots. It seemed crazy to us. That's probably because we had an unlimited supply of film at our disposal, generously supplied by the school of course. But to him, it was about being patient, thoughtful, and determined when it came to photography. He also had one of the coolest cameras I had ever seen. [again] I had only seen a few in my day but the one he had was awesome. Rick shot with a Pentax 6x7. If you don't know what that is, it's a 2 1/4" film camera that is set up like a 35mm, only much larger and, much more cumbersome. He had an entire system. The camera body, 3 lenses, different viewfinders, the whole ball of wax, in one shiny silver case. The image quality was amazing compared to a 35mm. The negative or transparency you shot with it was huge. Five or six times larger than a 35mm in size. It was this camera, and it's operator that led me down a new path in search of "image quality", and "truly wanting to know the process" of taking great photographs. I ended up buying that camera system from Rick a year later. He was going Hasselblad. The baddest medium format camera known to man at that time. I used that 6x7 for everything from skateboarding photos to studio set ups, and everything in between. It was one of my favorite cameras .... until it was stolen from my car years later. I was so bummed. On a positive note, the camera was insured and I was able to use the money I got for it to purchase my first set of studio strobe lighting. I still had a 35mm to shoot with so lighting seemed to be the next logical step.

I guess there's a silver lining in everything.

I can always tell the Pro's from the Shmo's by if they say: "pictures or photographs"

Posted by Tony Hernandez at 3:42 PM No comments: Links to this post 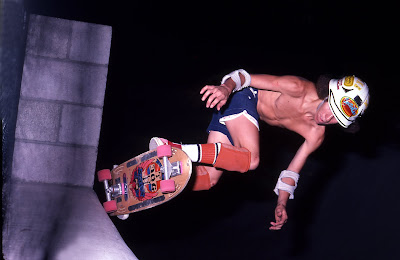 Posted by Tony Hernandez at 12:59 PM No comments: Links to this post